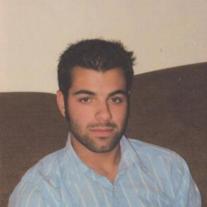 This is a picture of Cameron Lee Shultz, the little brother that I never knew. Like many Americans, I came from a broken family. My mother left when I was a toddler and I was raised by my dad and grandparents. She went on to marry and divorce and marry again, having 2 more kids with 2 different men. Cameron was the oldest of the two and was born on July 2, 1989. I met him a couple of times and I’m pretty sure he knew that I existed, but we never communicated. I’ll admit that I tried very hard to find him and my mother, but they have both eluded my investigation for years.

While conducting a periodic investigation yesterday, I found that Cameron died on August 4, 2012. It was about 4:30 and I was at work. My emotions began to take over. I became very angry and bitter. Why wasn’t I contacted? Why has Paula Garst (the woman who gave birth to me) hidden herself and her family from me all these years? Why has she refused to respond to my attempts to communicate with her? I had to leave the office and get home to my wife.

Emotions can be a dangerous things when they are not grounded in truth. I needed to apply the truths that I had realized about reality and existence to the situation. I know that life itself is a gift from God and that we are all deserving of God’s wrath. I know that I should rightfully be burning in the pits of hell (as should you, oh blessed reader!) Cameron deserved God’s wrath just as much as I do and just as much as Hitler and Stalin. How can this be true? Sin has penetrated every aspect of our being. We are guilty of the sin of Adam and by virtue of being human, we deserve God’s wrath. Our very nature is to reject God and embrace the things that God hates.

With the knowledge of the nature of man comes the knowledge of God’s sovereign grace. Not only is God in control of all things (including the numbered days of man), He is the one who saves man from His wrath. He does this by making us alive spiritually, which causes us to have faith and repent. He poured his wrath out on Christ so that His people, the people that He saved, is saving, and will save, will not receive the punishment that they have earned.

Having thought about those things, and the knowledge that the physical family that we have on this earth is temporal and the family of God, those numbered for salvation, is eternal, I can respond to life situations like the death of Cameron Shultz in an informed manner. Here are some conclusions that I have made that have comforted me.

Thus we see three aspects of brotherhood, in order of importance: genetic, familial, and spiritual. My genetic half-brother is no more important to me than a stranger on the street. My brother and sister (and dear friends that I would call brother) bring me fond memories and have had an impact on my growth. My supernatural brothers and sisters, those who believe in the Lord Jesus Christ, are the most important people to me because the relationships that I have with them are eternal.

How do I proceed with life, then? Should I pursue the one who gave birth to me and demand answers? Should I seek my little sister Heather Garst and try to be a big brother? Or should I seek the One who delivered me? I can no longer be bitter about Paula Garst’s abandonment of her son because she is a sinner just like you and me. How can I be angry about her sin when I am just as deserving as her of God’s wrath? Therefore I will not pursue her. I will pray for her salvation, worship the Lord, love my wife and kids, and eat barbecue. That’s what life’s about. We shouldn’t involve ourselves in worthless pursuits. We should rather worship God and enjoy the fruits of our labors. Read the following verses from Ecclesiastes (ESV):

There is nothing better for a person than that he should eat and drink and find enjoyment in his toil. This also, I saw, is from the hand of God, for apart from him who can eat or who can have enjoyment? (2:24-25)

I perceived that there is nothing better for them than to be joyful and to do good as long as they live; also that everyone should eat and drink and take pleasure in all his toil—this is God’s gift to man. So I saw that there is nothing better than that a man should rejoice in his work, for that is his lot. Who can bring him to see what will be after him? (3:12-13, 22)

Behold, what I have seen to be good and fitting is to eat and drink and find enjoyment in all the toil with which one toils under the sun the few days of his life that God has given him, for this is his lot. Everyone also to whom God has given wealth and possessions and power to enjoy them, and to accept his lot and rejoice in his toil—this is the gift of God. For he will not much remember the days of his life because God keeps him occupied with joy in his heart. (5:18-20)

And I commend joy, for man has nothing better under the sun but to eat and drink and be joyful, for this will go with him in his toil through the days of his life that God has given him under the sun. (8:15)

Go, eat your bread with joy, and drink your wine with a merry heart, for God has already approved what you do. Enjoy life with the wife whom you love, all the days of your vain life that he has given you under the sun, because that is your portion in life and in your toil at which you toil under the sun. Whatever your hand finds to do, do it with your might, for there is no work or thought or knowledge or wisdom in Sheol, to which you are going. (9:7, 9-10)

Remember also your Creator in the days of your youth, before the evil days come and the years draw near of which you will say, “I have no pleasure in them”; Fear God and keep his commandments, for this is the whole duty of man. For God will bring every deed into judgment, with every secret thing, whether good or evil. (12:1, 13-14)